You Will Be Able to Get Tangles Out of Dog Hair after reading this. 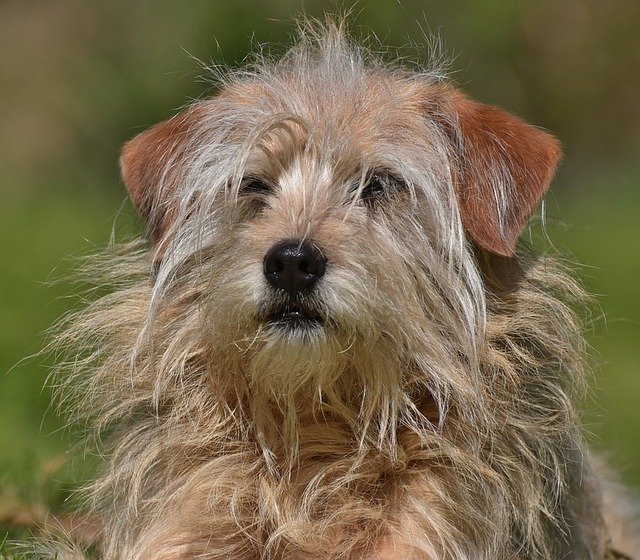 It is the old conundrum of exactly how does one set about eating an elephant? The original answer to that question is, “Just one bite at a time!”

Actually, it is the same answer for the way to undertake any large task. Taken in its entirety, it can be formidable.

Whenever you organize it into steps, stages, logical pieces, then you’re able to see how to get it done, little by little.

Here then is how you can approach the elephantine task of getting tangles out of dog hair, when the dog has been neglected,  in 7 easy steps.

Step 1. Recognize the importance to the dog that you remove the tangle and thereafter continue with regular grooming. With this you’ll want to get on and do it as the difficulty must be sorted. If you choose not to do that or forget it, you could expect this condition to become dangerous to the dog, and it’s also bad for the humans and other dogs who live in the neighborhood. How is it dangerous to the dog? Raveled hair is a great hiding place for fleas, mites and ticks. That’s why.

Step 2. Appraise the limit of matting. Is it all over the coat? Is it mud streaked? Is it only at the ends of the hair? Has the matting extended to the roots? This part is important because it dictates the method of grooming to get tangles out of dog hair. If the matting is too severe it is best to cut the coat and not put the dog through an initial grooming which proves unsuccessful, and THEN decide to cut the tangles out ).

Step 3. If the matting is all over the coat, mud streaked and has extended to the roots, the simplest way to get shot of the difficulty is to chop away all the dog’s coat. This is going to mean that the animal will be less stressed by the grooming session. It will also signify that the groomer is looking after the interests of the dog, which is always important.

Step 4. Take great care while snipping away the hair that you do not hurt the dog’s skin. This will involve complete concentration on your behalf, especially if you are new to grooming.

Step 5. Having done that it is time to groom the dog, treat it for ticks, mites, fleas and dandruff (very frequently such dogs will have all of these infestations simultaneously). An important factor you will want to remember here is going to be that to remove fleas you will have to treat house and garden as well. Why this is important is fleas and other pests are as nearly as possible eradicated from the dog’s house and garden by the dog owner.

Step 6. If the matting is confined to the ends of the hair, measures needed aren’t as extreme as the prior one. Nonetheless, it will be a pointless job if you don’t continue grooming your pet . .

Step 7. Get the dog to lie on a table. Now you are almost there! Remember, to have available a pair of tiny scissors as well as a good sized one. The little scissors are for tricky places such as the paws, the ears and eyes. Rigorously snip off any raveled parts. After you are done with fragile areas, use the other pair of scissors and snip off the remainder of the raveled hair. Next, comprehensively brush the dog down to get rid of little tangles..

Once you continue with the steps set forth above, step-by-step the enormous elephant-challenge you used to be facing is going to be “consumed”, conquered and finished off. You’ll achieve success, complete your project after which you can enjoy your winner’s rewards, the fruits and advantages of your victory! Congratulations for your triumph! You undertook a tremendous challenge, overcame it and won, taking 1 step at a time!

How Often Should My Dog Be Groomed?